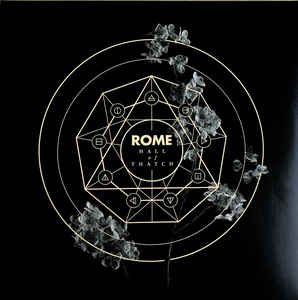 Background/Info: Jérôme Reuter aka Rome can look back at a successful career which took off in 2005 and an impressive discography releasing productions first on Cold Meat Industry and next on Trisol. The artist from Luxembourg became one of the Trisol flag holders. “Hall Of Thatch” has been introduced as an album inspired by the Apocalypse and a trip to Vietnam the artist made a few years ago now.

Content: “Hall Of Thatch” has been introduced as one of the most intimate releases from Rome. It’s not easy to affirm when discovering the music, but the lyrical content clearly reflects deeper thoughts from the artist’s inner life.

Sound-wise, Rome moves on there where he stopped with his artistic and sensitive ‘chanson’ style featured on previous albums. There’s more passion and even rage emerging from the songs and especially his way of singing. Field recordings and sacred chants from his trip to Vietnam inject an extra mysterious and somewhat ritual aspect to the work. Rome is covering different influences, but in the end and for one more time he reminds me to Nick Cave. One of the ‘hardest’ and most enraged cuts entitled “Martyr” even reminds me of The Birthday Party.

But Rome also experiments with more psychedelic passages, sometimes mixed with folk elements and sometimes reminding me The Doors for a background organ sound.

+ + + : Rome is not exactly the kind of artist repeating himself. He rather appears to be a musician going through different periods and “Hall Of Thatch” might be the beginning of a new era. I like this approach of an artist in constant evolution leading him reconsidering and sometimes reinventing his own sound. I like the passion running through the cuts resulting in a few enraged passages and truly climaxes. The experiment with sacred chants from Buddhist temples totally matches with the delicacy of the composition. Rome again has accomplished a beautiful opus featuring multiple outstanding songs. Last, but not least I once again have to say a word about the great artistic digipak and booklet of this ‘standard’ edition, which remains a trademark of Trisol.

– – – : I sometimes gets the feeling that the link with Nick Cave becomes too explicit, but at the other side it also is because of a similar timbre of voice.

Conclusion: If this work has been announced as one of the most personal and intimate releases from Rome, I think it first of all is one of his most passionate releases where you literally can feel the songs floating through his blood.