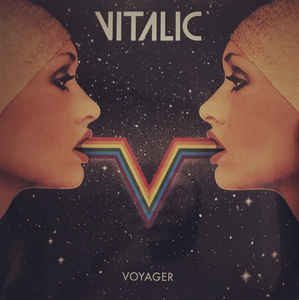 Background/Info: Pascal Arbez-Nicolas better known as Vitalic gained a serious reputation in the selected and intelligent areas of techno music and other electroclash. After the release of his maxi “Poney” released in 2001 on International Deejay Gigolo Records he became instantly renowned. Vitalic went on, in the meantime creating his own and now respected label Citizen Records and releasing new productions. “Voyager” is the first album since “Rave Age” (2012) featuring 10 songs and numerous (famous) guests.

Content: The work of Vitalic remains carried by solid technoid and electroclash influences, but globally speaking it became more versatile throughout the years. “Voyager” is a real sonic journey giving me the feeling that Pascal Arbez-Nicolas simply exorcised all of his sonic ideas.

I consider the more electroclash tracks as the most exciting ones, but I also noticed electronic treatments reminding me of Kraftwerk and a bassline in the purest Front 242 format. There also is a part of electro-pop featured and a cool kind of parody from the famous song “Warm Leatherette” renamed “Sweet Cigarette”.

Notice by the way that next to contributions of David Shaw and Mark Kerr there also is Miss Kittin who contributed to one song.

+ + + : “Voyager” sounds into modernism. While holding onto great electroclash driven cuts (cf. “Hans Is Driving feat. Miss Kittin”, “Lightspeed” and “Nozomi”) I also fully enjoyed the minimal-minded “Waiting For The Stars feat. David Shaw” and the harder, body-driven “Levitation” revealing a terrific ‘242’ bass line. The final song (cf. “Don’t Leave Me Now”) reveals a pure electro-pop approach and a somewhat hidden side of Vitalic. I already mentioned the kind of “Warm Leatherette”-parody, which has been transposed into “Sweet Cigarette”. This is a cool techno-punkish touch reinforcing the diversity of this work.

– – – : Diversity can be also seen as one of the points that can’t totally convince and I especially think to the electroclash die-hard fans.

Conclusion: Vitalic doesn’t repeat himself although hold on familiar and successful ingredients to compose a more open-minded piece of music. “Voyager” is a great journey through danceable electronic areas.