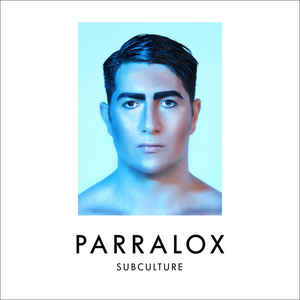 Background/Info: Parralox is a prolific band animated by the creative spirit of John von Ahlen. “Subculture” is the 8th full length of the band while they also released a few remixes-albums. “Subculture” features 2 different parts. You first get the ‘Red’ part, which is totally into dance-pop and next the ‘Blue’ part featuring more ‘traditional’ electro-pop. Each part has 7 songs. Notice by the way numerous guest singers contributed to this album.

Content: The ‘Red’ part moves on the edge of commercial music. It’s more into dance music instead of electro-pop. The songs are well-crafted and giving you a kind of ‘feel-good’ feeling. Especially the first cuts are totally dance-club minded while driven by sensual female vocals. Louise Love became a familiar singer of the band and contributed to several dance-cuts, but also to several electro-pop driven songs.

The ‘Blue’ part is more into the classical approach of Parralox. The songs mix good-old 80s influences together with a refreshing and more contemporary input. Several songs remind me of bands like Erasure and The Human League. I also noticed an interesting and somewhat nu-disco influence running throughout one of the cuts.

+ + + : Parralox feels comfortable experimenting with different pop-approaches. They already proved to make great covers (cf. “Holliday ‘15” and “Holliday ‘16”-albums), but are still into alluring dance-pop music and of course they remain a cool electro-pop band. I especially like the vintage approach of the work, which is nothing new although composed with brilliant sound treatments and a perfect balance in the vocals production. I definitely prefer the ‘Blue’-pop part of the album. This is the sound where Parralox stands for and where they excel on “Last Man standing”, “Voyager II” and “Rocket Silence II”. A last and essential aspect of the work is the already artistic uniformity of the artwork. Parralox created an easy recognizable artwork, which you directly link to the band.

– – – : Even if I have nothing to say about the production of the ‘Red’-dance side this part of the work sometimes reveal cheap dance tricks moving on the edge of commercial music. I think it would have been better to release it as a separate release or a bonus disc.

Conclusion: Parralox moves in between dance and pop music, but lost a bit of their splendor on the ‘dance’-side. They definitely remain an electro-pop formation and that’s what I enjoy when listening to their sound.