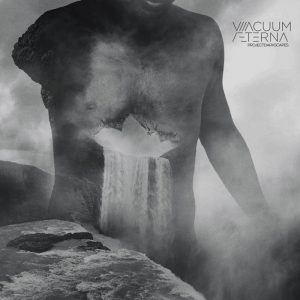 Background/Info: Vacuum Aeterna is an ambient inspired project from Italy unleashing its debut album “Project: Darkscapes” on Cyclic Law. The work deals with the transposition into sound of ‘a voyage through a fog and humidity drenched enclave of a forgotten ancient forest’.

Content: Vacuum Aeterna creates a dark-ambient universe filled with freaky atmospheres and slow, industrial rhythms. I noticed a spooky-like guitar bringing some variation to the ambient sound. Vibrating tones and deep sonic blasts plus field recordings have been used. Some passages are moving into mysterious, repetitive industrial loops sometimes joined by drones.

Some of the field recordings are featuring noises from the forest, which matches with the concept of the work.

+ + + : “Project: Darkscapes” is a honest debut, which mainly caught my attention for the electronic treatments and heavy sound manipulation. The ambient sound brings the concept of walking throughout a forgotten and ancient forest alive. This forest feels abandoned and hiding dark and maybe murderous secrets. There for sure is a strong visual appeal emerging at the surface. Vacuum Aeterna is not exactly recreating the dark-ambient genre, but this album reveals a unique approach.

– – – : The album is fully enjoyable and featuring a few noticeable cuts, but there’s no real apotheosis. I’m missing passages ending with a climax.

Conclusion: Vacuum Aeterna is a new coming project with a sophisticated dark-ambient approach while using field recordings accentuating the concept of the work. This is a truthful debut so let’s keep an eye on this band.