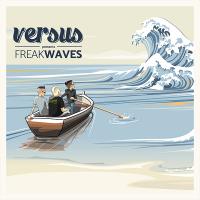 Background/Info: Versus is a German electro-pop band, which I remember from the cool album “Different Twilight Places” released in 2010 on Echozone. So we might say that “Freakwaves” is a kind of return for this band claiming to compose ‘AhoiPop’. It stands for ‘catchy melodies, epic hymns, addictive ballads and smart clubhits. AhoiPop stands for honest, poignant and profound lyrics’. I guess that’s not that different from numerous electro-pop bands!

Content: “Freakwaves” is a pleasant and danceable electronic work, which is alternating German- and English vocal parts. Some of the songs sung in German remind me a bit of Beborn Beton while the most danceable and melodic pieces might evoke some Syntec elements. The Syntec-link is quite interesting as I discovered after the listening that Toby Hartwig (Syntec) contributed to one of the tracks. Other noticeable guests are Vasi Vallis (Frozen Plasma, NamNamBulu) and Nils Upahl (Beyond Obsession).

But Versus first of all is a band trying to compose a unique sound. They like diversity, and experiment with a few different influences. Some songs are softer and a bit into electronic ballad style while other cuts are carried by some EBM elements. I also noticed a song with a rather minimal-like approach (cf. “Gloaming”).

+ + + : “Freakwaves” is a successful return for Versus. This is the right work to bring the band back on the electro-pop map. The songs are diversified and well-crafted. There’s a perfect balance between melodies, danceable vibes, German- and English vocals. The album is maybe missing an absolute hit song, but there are several great tracks. Last, but not least Versus also invites interesting guests who contributed to a few songs while Krischan Wesenberg (Rotersand) did the production.

– – – : There are no real minor points about this work. As I already mentioned the album is maybe missing a real hit while the few softer cuts aren’t the main strength of Versus.

Conclusion: Versus is back on track and has accomplished an exciting piece of dance electro-pop music. The right definition for ‘AhoiPop’ is maybe and simply ‘intelligent electro-pop’!