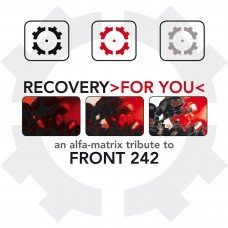 Background/Info: 2016 has been a particular year for the Belgian label Alfa Matrix. They celebrated their 15th anniversary and the 35th anniversary of the Godfathers of EBM: Front 242. Next to astonishing and luxurious Front 242 –re-releases the label closed 2016 by a surprising ‘celebration’ album featuring 32 bands of the label covering Front 242.

Content: I was honestly a bit afraid to discover this massive cover-tribute to the greatest EBM band in history. I’m still convinced there are some bands –like Front 242, you’d better avoid covering, but on the other side I think it also is quite exciting to hear non-EBM bands re-interpreting some of the most famous and legendary ‘242’-hits.

Most of the chosen songs belong to the glorious 80s period of the band. Songs like “U-Men”, “Kampbereit”, “Operating Tracks”, “gvdt”, “Body To Body” “Lovely Day”, “Don’t Crash”, “Lovely Day”, “No Shuffle”, “Commando Mix”, “Moldavia”, “Never Stop”, “Headhunter”, “Welcome To Paradise”, “Tragedy For You” and many, many others have been selected.

The result is quite diverse and of course not always that EBM-like, but clearly accomplished with a real devotion and I dare to say respect for this unique band in history.

+ + + : One of the first highlights is the modern adaptation of “Moldavia” into the pure Komor Kommando style. “Body To Body” has never been so sexy thanks to Neikka RPM. Ayria probably covered the biggest hit (cf. “Headhunter”) into a fully enjoyable body-pop style. Avarice In Audio transposed “Welcome To Paradise” into a technoid inspired cut. Acylum remained dark-electro inspired, covering “Serial Killers Don’t Kill Their Girlfriend” into their unique style. Regenerator (which has been produced by Daniel B) did a fantastic job covering “Religion”.

Elektroklänge (one of the new label signings) reworked “Funkahdafi” into a sterile, but cool robotic version. In the purest EBM vein I noticed great contributions from Elm (cf. “Operating Tracks”) and Kant Kino (cf. “No Shuffle”). Circuito Cerrado vs. C-Lekktor is another great dark-electro artist injecting a dark-electro boost into “Moldavia/Neurobashing”. Növö probably is one of the bands, which is the most close to the early analogue experiments of Front 242 and logically covered one of the early songs (cf. “Kinetics”). I also noticed a surprising and high-tech cover of U-Men” by Llumen.

– – – : There’s only one Front 242 and that’s precisely what this sampler confirms! I heard many cool cover versions, but none is better than the original version, that’s for sure.

Conclusion: Some will call it a blasphemy, but others (young fans) will maybe discover Front 242 thanks to this kind of compilation. I heard an entertaining album!

Since you’re here … … we have a small favour to ask. More people are reading Side-Line Magazine than ever but advertising revenues across the media are falling fast. And unlike many news organisations, we haven’t put up a paywall – we want to keep our journalism as open as we can. So you can see why we need to ask for your help. Side-Line’s independent journalism takes a lot of time, money and hard work to produce. But we do it because we want to push the artists we like and who are equally fighting to survive. If everyone who reads our reporting, who likes it, helps fund it, our future would be much more secure. For as little as 5 US$, you can support Side-Line Magazine – and it only takes a minute. Thank you. The donations are safely powered by Paypal.
Tags: Acylum, AD:Key, Aesthetische, Ayria, C-Lekktor, Diffuzion, EBM, Elektroklänge, Elm, Imjudas, Implant, llumen, Növö, Recovery >For You<, Regenerator, Schwarzblut, Technoir, V/A