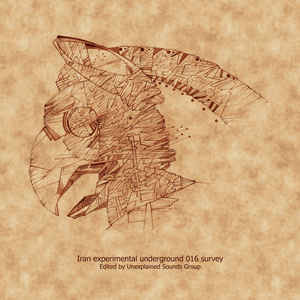 Background/Info: Unexplained Sounds Group is a digital label and platform for mainly dark-ambient music. Next to other releases they created an interesting conceptual series revealing ambient music from different countries. They released albums with underground music from Germany, France, Italy, Canada ao while this series is dealing with music from the Iranian scene. It features 19 Iranian formations active at the wider fields of dark-ambient and experimental music.

Content: We all know Iran from our history books, but we often forget this country also has a very active and interesting underground scene. Bands like Idlefon and Alphaxone became praised and successful names of the dark-ambient scene. This album sounds like a magic trip throughout the underground scene of Iran and more especially of its capital Tehran, where most of the bands are located.

This is a real diversified release revealing multiple intelligent sound treatments by bands like Alphaxone, Bicolor, Umchunga and Xsix, but also more experimental treatments from bands like Hossein RangChi and Idft plus industrial-inspired formations like Xerxes The Dark, Nyctalllz and Spectro Duo.

There also is more minimal-minded work by Elemaun revealing subtle treatments and the more into IDM-like Hami Keivan and Tehransmission.

+ + + : This compilation is not just dark-ambient music. It especially reveals an impressive sonic welfare of a country, which clearly seems to produce intelligent and passionate sound architects transposing ambient music into a real creative exposure. Next to a few familiar and established names I discovered several talented formations, which I hope will progressively found their way towards the West. I like this kind of conceptual release giving us an idea about the underground ambient-scene from one specific country!

Conclusion: This is one of the most intelligent sampler concepts from the past few years, which made us also, discover unknown, but great bands.