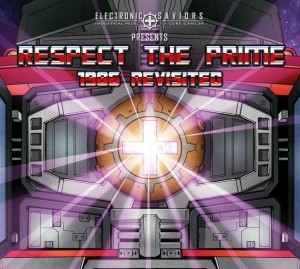 It is with this intent that his label, Distortion Productions, LLC and Electronic Saviors offer up a tribute to the robots in disguise with “Respect The Prime: 1986 Revisited”. For the first time ever, the classic soundtrack from 1986’s “Transformers”-movie has been rebuilt from the ground up.

Content: This sampler features 17 formations dealing with a rather diversified inspiration. No doubt about it, the original songs probably influenced the bands to experiment in sound and style. This album reveals several hard-rock minded pieces, which is a total surprise.

Other cuts move into electro-rock and vague electro-pop. But you also will hear some elements of metal music and even punk. Several songs are instrumentals, which accentuate the soundtrack feeling. Only one band (cf. am.psych) has been featured with two songs. One of them is the theme of “The Transformers”.

+ + + : The idea to release a music compilation as a way to bring some aid to cancer victims is not new, but still a great mark of solidarity and commitment. This is a record you’ll buy because of its initial concept while the content will for sure deliver a few nice surprises. am.psych is not exactly a newcomer although not exactly a familiar name and their electro-rock music reminding me a bit of The Swamp Terrorists.

– – – : Sound-wise this sampler is really versatile and simply mixes the most different and sometimes opposites genres together. There’s not much cohesion between some songs.

Conclusion: I’m definitely into the goal and concept of “Electronic Saviors” although the content of this edition can’t totally convince me!