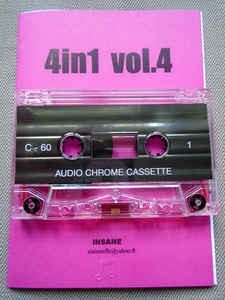 Background/Info: The “4 In 1”-series has been created by Alain Neffe during the early 80s. The concept was to bring 4 bands together on 1 record. There’s a serious hiatus between both debut releases and the third one released on EE Tapes in 2012. The newest edition has been released on Alain Neffe’s own label Insane Music and brings 4 bands together.

Content: BeNe GeSSeRiT is a band that doesn’t really need any further introduction. It remains the main and most famous formation Alain Neffe has been involved in. The sound is characterized by a mix of good-old 80s elements and pure experimentalism. I sometimes call it sonic Dadaism.

M.A.L. is a project set up by Daniel Malempre who you maybe know from other projects and especially Human Flesh and Kosmose. The sound remains pretty experimental, but also a bit soundtrack-minded with some psychedelic elements on top.

Kosmose has been featured as well with one single, but with a long duration cut in the purest experimental tradition.

Alice Just is a band I never heard of before and they make their first steps on this cassette. It sounds a bit in the line of some BeNe GeSSeRiT-music so it was not coincidental realizing that Alain Neffe is helping a hand. But Alice Just first of all is a female theatrical voice telling you absurd and somewhat surreal stories in a French poetry style.

+ + + : Insane Music deals with sounds that fashion music lovers have never heard. It’s more than simply experimental music, it sometimes appears to be a kind of childish and somewhat innocent-like music style. I’m not always convinced by the music the label is dealing with, but I highly respect the creation and spirit of Alain Neffe. I’ve a preference for the songs of BeNe GeSSeRiT and M.A.L.

– – – : No doubt about it, this is music for a restricted number of music freaks. This is an antidote to all kind of commercial productions and catchy pop songs. That’s for sure what will make it hard to listen to.

Conclusion: There’s one main point you can’t reproach to Alain Neffe; he’s composing really different music than the masses. He’s a kind of alien moving throughout a music universe that is too often repeating itself and easily jumping on fashion trends.