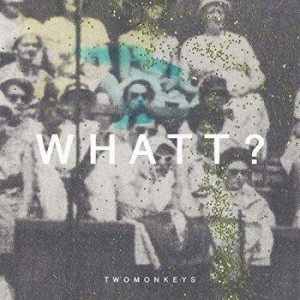 Background/Info: A few years ago now the brothers Simone and Michele Bornati set up TwoMonkeys. “Whatt?” is their second full length album, which has been released in their homeland Italy on Villa Recordings.

Content: I never heard of this band before and the least I can say is that they’re dealing with multiple influences. Their sound is a mix of music genres moving from pure experimental music to a kind of industrial-rock to something Krautrock-like. You can hear 80s influences and even electronic passages reminding me of early Revolting Cocks, but also a kind of improvised compositions and other parts evoking some Suicide souvenirs.

“Whatt?” stands for a mix of electronics and guitar, but still pure experimental music featuring field recordings (or samplings). There are many guest musicians who contributed to this production and, which maybe explains the diversity.

+ + + : TwoMonkeys clearly appear to be open-minded artists bringing different influences together. I like some industrial-rock compositions and I especially recommend the title song for its great chorus where you’ll maybe feel the need to shout along with the singer. The more electro-driven cuts are noticeable parts as well. “Fingers” and “Troubling” evoke some 80s influences while “Train Cloud” again is something different that might appeal to Suicide fans.

– – – : The experimental format of the band makes it rather complex and not that accessible for a wider audience. TwoMonkeys clearly compose an atypical sound, which is not easy to define. I’m not that fond of the more improvised-like cuts.

Conclusion: TwoMonkeys sounds like music composed by aliens. It’s a weird experience and yet fascinating because of its diversity.