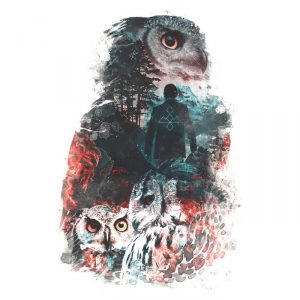 Background/Info: David Lynch fans and especially the “Twin Peaks”-ones will directly recognize the legendary extract ‘The Owls Are Not what They Seem’. Russian label Zhelezobeton previously released the sampler “Now It’s Dark”, which already was a tribute to the legendary filmmaker. This new tribute features mainly remixes from these songs. Most of the bands are featured with two cuts.

Content: This is a quite diversified compilation featuring a total amount of 25 tracks. Most of the bands are hailing from Russia. This sampler is an invitation to discover a varied selection of music tracks inspired by the work of David Lynch and transposed into different kinds of music.

+ + + : I like the concept, but the main strength of this album definitely appears to be the discovery of less familiar and simply unknown music projects. The IDM orientated cuts are pretty inspired and I especially want to tip the track of Relic Radiation remixed by Sal Solaris. Another noticeable cut is the one by Povarovo remixed by Bionoid. I also want to mention another track of Relic Radiation remixed by Alex Schultz, which moves into electro-minimalism. The IDM tracks clearly are the best exponent of this sampler.

– – – : Diversity creates a lack of coherence between some tracks. It’s quite strange to hear a totally industrial and experimental cut as an ode to David Lynch while other cuts are definitely more electro- and even dance-like. On the other side it also stands for the work of Lynch, which often is hard to seize.

Conclusion: This is a noticeable compilation, which I absolutely recommend. It will give you the opportunity to discover a bunch of ‘new’ bands, but still many cool cuts. I would like to know what David Lynch would think about it….

Tags: Anthesteria, Russia, V/A, V/A The Owls Are Not what They Seem: David Lynch Tribute Remixes