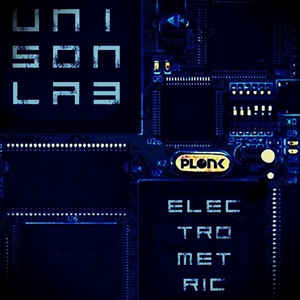 Background/Info: Unisonlab is a Swedish project set up and driven by Jörgen Erixon. His sonic brainchild Unisonlab is part of the so-called Plonk Community, which ‘produce high quality electronic music in the machine-pop’. The debut album “Electrometric” has been released as digital work on Plonk and licensed to Razgrom Music to get released on CD.

Content: “Electrometric” is what I commonly call ‘Kraftwerk-pop music’. You directly will recognize the main source of inspiration, which brings us back to the early years of the German ‘robots’. The vocals have been produced with the unavoidable vocoder effect. The music is next to multiple Kraftwerk-sequences accomplished by deep, resonating bass lines, numerous little bleeps and electronic effects. The somewhat darker “The One You Seek” sounds a bit more personal in sound. The last songs are remixes made by Unisonlab himself, but also by Maschine Brennt and Kevin Lux.

+ + + : “Electrometric” sometimes sounds like an ode to Kraftwerk. There’s a growing number of electro-pop bands devoted to Kraftwerk. If the originality is far to find, I must say I enjoy this new project. The songs are well-crafted and achieved with alluring vintage sound treatments. The songs are meticulously built up and featuring multiple attention grabbers. There are also a few cool remixes featured and I especially want to mention both remixes by this other ‘Plonk’-formation Maschine Brentt.

– – – : The Kraftwerk die-hard fans and especially ‘purists’ will maybe the only ones to have some criticism about this album. One thing is for sure, there’s only one Kraftwerk and Unisonlab is just one of their countless followers and emulators.

Conclusion: If you’re not into clichés and sound emulation, you better forget Unisonlab, but if you consider there’s a kind of ‘Kraftwerk-pop’ music existing, this new formation really has some nice surprises to reveal.