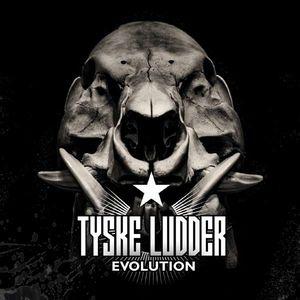 Content: This is album number 6 for German EBM combo Tyske Ludder. The “Maskalin”-EP was a solid and promising teaser to announce the new full length album and the least I can say is that this new opus appears to be one of the best EBM-releases of the year.

Tyske Ludder is an experienced veteran of the EBM scene and this maturity has been reflected in the entire production. EBM often sounds easy to make although you need a good production and a chorus that will catch your attention. “Evolution” is not the kind of ‘simple’ EBM work, but a rather elaborated and fully accomplished piece of work for which Krischan Wesenberg (Rotersand) have been asked for the production, recording and mixing of most of the songs. Other songs have been produced and mixed by Andreas Schmitz and Hilger Tintel.

Tyske Ludder remains pretty faithful to their familiar sound, which consists of powerful EBM structures, which sometimes reminds me of the pure old-school EBM à la Nitzer Ebb (for some of the bass lines) plus the harsh German growls of Claus Albers. But the music has never been as elaborate before like the “Evolution”-album. So it maybe is a kind of prophetic title, which explains the evolution in sound of the band, which is more straight –especially, during the early years.

We now can discover songs with multiple little sound treatments like sweeps and a real accomplished production work. The chorus lines have been empowered by carrying lyrics and heavy sound outbursts. A few songs even feature (sampled) guitar passages injecting an extra boost to the work. I here refer to the songs “Bambule – Album Edit” and “Hierophilie”. The song “Bambule” was previously released as EP-title song and revealing the evolution of the band.

“Meskalin” remains one of the main attention grabbers. It’s not exactly the heaviest cut by the band although an efficient mix between great synth lines and raw EBM-power. But my favorite songs for sure are “Promisk” for being simply and totally accomplished and “Triage” for a similar reason plus extra power on top.

The biggest surprise featured on this album for sure is the cover version of old Belgian rock-wave legend T.C Matic and their biggest hit in history “Ohlalala”. The EBM adaptation by Tyske Ludder is well-done and quite in harmony with the rest of the work. It also is the only song sung in English language.

There’s no real rest or break on “Evolution”. The power goes on and that’s what we expect from good EBM. “Evolution” is pure energy and filed with testosterone! Even the remixes.

I first of all have to mention the “Ewevw Edit” of “Narziss”, which explores some technoid-body fields made of great sound treatments. We next get a remix of “Hierophilie” by Rotersand and a remix of “Meskalin” by NorthBorne.

Notice by the way that Tyske Ludder also moved to another label for this album. The band left Black Rain to join Golden Core.

Conclusion: An album always has to be placed in the right context; some might say that “Bombt Die Mörder?” (1994) will always remain their best album ever, but when you pay some attention for the quality of the production and the elaboration of the writing, “Evolution” definitely appears to be their best work ever.