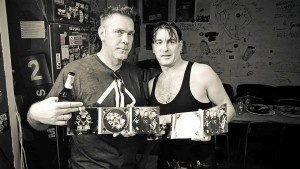 EBM fans discovered Tyske Ludder during the 90s. They were signed to a small, but interesting label (cf. KM-Musik) on, which they released 2 great and punching albums plus an EP. After a hiatus of several years the band finally stroke back in 2006 by a new full length released by Black Rain. Two more albums plus a compilation album and a few EP’s were released later on. The EBM style remained intact and Tyske Ludder progressively conquered new and younger EBM fans. Their newest full length entitled “Evolution” is a quite prophetic title, which symbolizes the global sound evolution of the band and the move to another label (cf. Golden Core). We got in touch with Olaf A. Reimers to ask the band a few questions about one of the best EBM-productions of 2015!

SL: What comes directly into mind when evoking your new album “Evolution”?

Tyske Ludder: It’s probably the best and versatile work we ever delivered. We liberated from a lot of old, emotional ballast, which accrued over the last years. We signed to a new label, we went back to our 2-man-studio-crew and focalized on our main strength: ‘two lazy guys who just wanna make ass-kicking electronic music‘.

SL: I indeed experienced the new album as the most elaborated and accomplished work in history of the band. How would you analyze the global result and especially when comparing it to your previous albums?

Tyske Ludder: In fact it’s just an evolution. We had 4 years to make the songs and a huge variety of tracks to choose from. You each time again try and try to get a little bit further on your next album. And the cutoff from the guy we worked with on “Anonymous” and “Diaspora” was the other great impact on our actual album.

SL: Less bands today are working with ‘real’ producers while you asked different producers to join in. What have been their real impact on “Evolution”?

Tyske Ludder: Olaf wanted to give his Harmjoy project (cf. side-project) an impact from different people, so he choose to work with Krischan, Hilger and Andreas. The result was breathtaking so that’s why we decided to work with them again on Tyske Ludder’s “Evolution”. Their main focus on the album was, to get a SOUND. We wanted this time to get the maximum out of our song writing and we’re still very satisfied with their work.

SL: How do you see your own evolution as musician(s) and band over the years regarding elements like ‘composition’, ‘influences’, ‘lyrical themes’ and ‘live performances’?

Tyske Ludder: The evolution of these elements in the work of Tyske Ludder all over the years is the story of our own evolution; personal taste in music and the possibilities you get from modern computer based instruments. We never joined the hype with real, analogue instruments. Only live Olaf uses an Arturia Minibrute analogue synthesizer to get some dirty sounds this way getting a kind of live feeling in our performance.