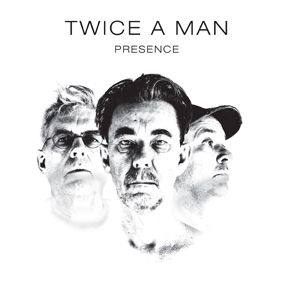 Background/Info: Twice A Man is a veteran from the Swedish electro-pop scene. They are no longer releasing new productions like before, but the new album appears to be a special one. Dan Söderqvist and Karl Gasleben are joined again by Jocke Söderqvist who left the band during the 80s.

Content: The new work features an interesting twist of influences, which are moving past simply synth-pop music. The debut part sounds pretty bombastic and into industrial components while a divine, mystic passage is noticed at “A Time Of Terror”.

The album progressively evolves towards a more ambient format of electro-pop music. It sometimes moves into film music and dark reverie accompanied by clear and passionate vocals. The songs have been carried by a slow cadence and often accomplished by guitar.

There are a few beautiful songs at the end of the album and I especially refer to the final songs accompanied by female backing vocals.

↑↑↑: I like the dreamy and elevating sensation of the songs. The few industrial components bring some of the songs into a rougher approach are really interesting.

↓↓↓ : Some passages remain a bit flat and without a real climax.

Conclusion: “Presence” is an interesting pop-driven work revealing a wider arsenal of influences.