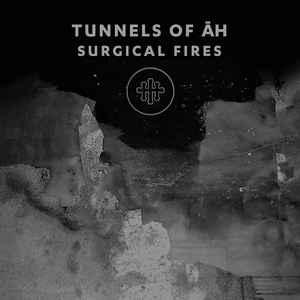 Background/Info: In a previous life Stephen Reuben Burroughs got involved in Head Of David. Today he has found a new sonic canvas called Tunnels Of Ǡh to exorcise his music ideas. “Surgical Fires” is the third album by this music veteran.

Content: “Surgical Fires” takes off with noise-driven loops and that’s an essential element running throughout the entire production. Burroughs creates a kind of horror-soundscape accentuated by tormenting sound manipulations. From boiling noises and buzzing sound waves plus ghost-like whispers he creates a hostile atmosphere appealing your imagination to create dark and tortured visions.

That’s precisely what the title of this album is referring to: ‘a kind of psychic surgery’ probably to calm down the terror like visions this music is spontaneously appealing for.

+ + + : Tunnels Of Ǡh is a band, which is hard to define as one particular music style. It rather sounds as a synopsis of multiple, dark influences finally resulting in a personal dark music creation. This is a sound, which can’t leave you unaffected; it’s too freaky to leave you unmoved and that’s precisely the main strength of this work. I like the progression from rather noise-like opening cuts towards more ambient-driven cuts with solid sound treatments awakening your most secret and perverted fantasies. So in the end I would say that the ambient side of “Surgical Fires” is definitely hard-hitting.

– – – : “Surgical Fires” is the kind of work, which will be not accessible for a wider audience. That’s what all kind of underground music has to endure isn’t it? You don’t hear me to complain although the very first cuts left aren’t the most convincing ones.

Conclusion: “Surgical Fires” is the work of an alien or simply an artist finding an outlet for his most perverted music ideas. But no doubt about it, this is an artist who already has found disciples who will be ravished discovering this new creation of their Master.

Since you’re here … … we have a small favour to ask. More people are reading Side-Line Magazine than ever but advertising revenues across the media are falling fast. And unlike many news organisations, we haven’t put up a paywall – we want to keep our journalism as open as we can. So you can see why we need to ask for your help. Side-Line’s independent journalism takes a lot of time, money and hard work to produce. But we do it because we want to push the artists we like and who are equally fighting to survive. If everyone who reads our reporting, who likes it, helps fund it, our future would be much more secure. For as little as 5 US$, you can support Side-Line Magazine – and it only takes a minute. Thank you. The donations are safely powered by Paypal.
Tags: terror, Tunnels Of Āh