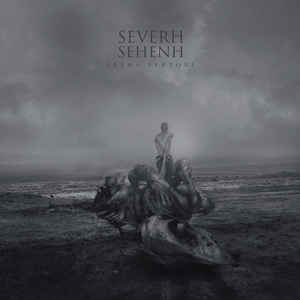 Background/Info: French composer ‘Dehn Sora’ active under the Treha Sektori moniker has already released a few number of productions during the past few years. “Severh Sehenh” was originally released on CD format on Cyclic Law in 2014 featuring one single track. This album has been now re-released on Consouling Sounds on vinyl format. Notice by the way this reissue is a collaboration between Consouling Sounds and Grains Of Sand Records.

Content: “Severh Sehenh” was conceived as a long duration single track although featuring multiple chapters. The main element of the work is the constant frightening atmosphere hanging over the work. This eternal coldness has been created by icy sound blasts, buzzing sound waves and a few spoken whispers. These ingredients have been reinforced by multiple percussion and drone parts, which sometimes push the state of fear towards an ultimate point. But the work also features different passages that are more animated.

+ + + : “Severh Sehenh” sounds like a sonic puzzle, which always moves on exploring new elements. You sometimes might have the impression that the darkest part is over till a new gate is opening to welcome a new nightmarish passage. But the most poignant and tormenting experience is yet to come and has been progressively built up at the final part of the record. Treha Sektori takes us on a murderous ride that is gaining intensity and volume at the real last minute to finally join an ultimate climax of angst. It’s an album with a strong visual appeal.

– – – : Treha Sektori is not a ‘classical’ dark-ambient formation and that’s maybe the reason why it’s not that easy to label this project. I’m rather sure it’s more a positive aspect, but maybe not catching the attention of all dark-ambient lovers.

Conclusion: I like the meticulous writing of this work, which constantly progress till finding its apogee at a fantastic sonic trip through imaginary places.

Since you’re here … … we have a small favour to ask. More people are reading Side-Line Magazine than ever but advertising revenues across the media are falling fast. And unlike many news organisations, we haven’t put up a paywall – we want to keep our journalism as open as we can. So you can see why we need to ask for your help. Side-Line’s independent journalism takes a lot of time, money and hard work to produce. But we do it because we want to push the artists we like and who are equally fighting to survive. If everyone who reads our reporting, who likes it, helps fund it, our future would be much more secure. For as little as 5 US$, you can support Side-Line Magazine – and it only takes a minute. Thank you. The donations are safely powered by Paypal.
Tags: Treha Sektori