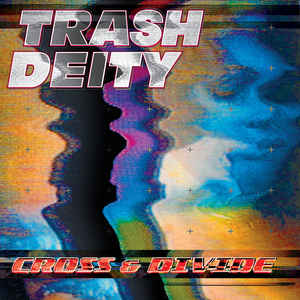 Background/Info: Behind this new project and the debut album “Cross & Divide” is hiding the duo ‘Groovie Mann’ aka Franke N. Nardiello (My Life With The Thrill Kill Kult) and ‘JDN’ aka John D. Norten (Blue Eyed Christ). They started Trash Deity a few years ago and released a few digital EP’s. This album wants to be a wink to Wax Trax!-sound ‘updated with a heavy electronic/guitar groove & modern production.’

Content: The goal of the Trash Deity has been successfully accomplished. There for sure is something Wax Trax!-like running through their work and I especially refer to My Life With The Thrill Kill Cult because of Groovie Mann particular, harsh timbre of voice. I also can mention they early –and electro-driven, sound of Ministry, but you also will maybe notice typical arrangements and sounds reminding to Blue Eyed Christ.

The work mixes harder- and more EBM-orientated songs together with some rock-driven cuts on, which the guitar is more dominating.

+ + + : The debut cuts are absolutely magnificent, revealing great electronic sound treatments, icy sounds, danceable rhythms and passionate vocals. The leads running through this album are quite noticeable as well. The guitar mostly empowers the electronic structure of the music.

– – – : The more electro-rock cuts (such as “Icons & Idols”) aren’t exactly my favorite tracks for being less original and simply average-like. These are maybe the more ‘American’-like cuts.

Conclusion: I didn’t know what to expect from both veterans, but “Cross & Divide” is according to me one of the best works they’ve accomplished in years.