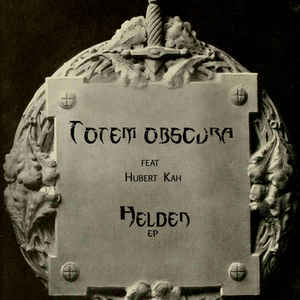 Background/Info: Pedro- and Nadine Engel got mainly recognized as the terrific Acylum-duo, but they’re also involved with a few more projects. Totem Obscura last year released its second album “Nordische Feste”. The duo now strikes back with this EP featuring Hubert Kah on the title song. Hubert Kah worked together with Michael Cretu and was also involved in the legendary Sandra hit “Maria Magdalena”.

Content: This is more than simply an ‘extended play’ as it features 16 (!) songs, which are mainly remixes from the title track plus 4 more songs that were originally released on “Nordische Feste”.

The debut song is an “Extended Version” of “Helden”, which brings us back to the medieval and dark-electro style of the album. It also has something cabaret-like. Remixes have been done by Acylum and HausHetaere (both featuring the Engel gang), but also by Nano Infect, Ilia Romashov, Restriction 9 and Ethan Fawkes.

“Blut Marschiert”, “Eisenmann”, “Bastard” and “Verräter” have been remixed as well while you also get a remix of the “Waldgeist”-song (originally released on the band’s debut work “Forgotten Time”). The most noticeable bands from the list are Mechanical Moth, XMH, Omnimar and Synapsyche.

+ + + : Totem Obscura tries to intermix medieval atmospheres with dark-electronics and I’ve to admit it’s a rather original idea. It sometimes reminds me a bit of Heimataerde, but in the end it simply sounds different and Totem Obscura-like. This EP doesn’t reveal that much new except for a real sonic orgy of remixes. I like the “Helden”-demo version vs. HausHetaere, which sounds original and featuring great chants passages. Other noticeable remixes are the “Eisenmann”-remix by Omnimar, which has been empowered by guitar riffs and the great “Endzeit Edit” of “Waldgeist”.  Restriction 9 also did a noticeable minimal-like remix of “Helden” while the most surprising remix is for sure the dark-techno version of the title song by Ethan Fawkes.

– – – : You have to be a die-hard fan of the band to fully endure this 16-tracks EP. Too many remixes here, but probably not for DJ’s.

Conclusion: I still believe there’s more potential inside Totem Obscura than what came out on “Nordische Feste” and this EP. I think they still have to find the right balance between the influences. I however have to admit there are a few really cool remixes featured.

Since you’re here … … we have a small favour to ask. More people are reading Side-Line Magazine than ever but advertising revenues across the media are falling fast. And unlike many news organisations, we haven’t put up a paywall – we want to keep our journalism as open as we can. So you can see why we need to ask for your help. Side-Line’s independent journalism takes a lot of time, money and hard work to produce. But we do it because we want to push the artists we like and who are equally fighting to survive. If everyone who reads our reporting, who likes it, helps fund it, our future would be much more secure. For as little as 5 US$, you can support Side-Line Magazine – and it only takes a minute. Thank you. The donations are safely powered by Paypal.
Tags: Acylum, Endzeit, Heimataerde, Intermix, Moth, Omnimar, Totem Obscura feat. Hubert Kah, XmH