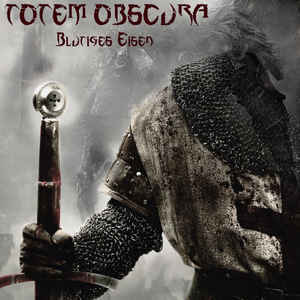 Background/Info: Set up by Nadine- and Pedro Engel, Totem Obscura was revealed to the world now 3 years ago by their debut full length album “Forgotten Time”. The duo mainly known from Acylum revealed a harsh electro-industrial sound, which I have to be honest couldn’t totally convince me. The band is now back on track unleashing 3 new songs plus 10 remixes.

Content: Totem Obscura is not Acylum and that’s rather important, but not always that evident. You’ll easily recognize some typical dark-electronic arrangements and possible influences from :Wumpscut: (a band that has always been pretty close in sound with Acylum), but there also is a kind of tormented medieval input. Dark medieval-like melodies join in and somewhat reminds me of Heimataerde.

You’ll hear disturbing electronic sounds driven by harsh male vocals and bewitching female ones. The new cuts by Totem Obscura are much more than dark-electronic and industrial-like, but sounds as if possessed by haunted atmospheres and evil forces.

+ + + : “Eisenmann” for sure appears to be a potential hit and definitely the song that is closer to Acylum, but I also fully enjoyed the more enigmatic “Bluttanz” sung by the ghost-like sounding Nadine Engel. The haunting atmospheres supporting this work are dark and tormented, which makes the particularity of Totem Obscura.

I noticed several cool remixes, but I’ll especially mention the great job by Project Erratic (a name to keep in mind), Benjamin’s Plague and Nebelwächter.

– – – : My only regret is the somewhat exaggerated number of remixes, which are quite cool although not really competing with the original versions. However, it also is an opportunity to discover a few less familiar names from this scene.

Conclusion: Totem Obscura strikes back in style and sounds more than before driven by some evil spirits. It also confirms the talent of Pedro Engel who’s for sure one of the new Princes of dark-electronics.