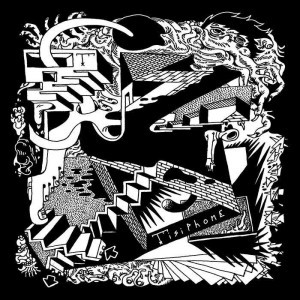 Background/Info: Tisiphone is a French band from Lyon and has already released their official debut album. The band consists of 3 members and is driven by their female singer. Notice by the way that Automate Records is a French label devoted to music genres like indie-pop, cold-wave, post-punk and related genres.

Content: The post-punk and cold-wave influences are quite noticeable elements in the work of Tisiphone. They don’t reinvent the music styles they’ve been inspired with, but achieved a quite honest production in the genre.

The songs are carried by low, buzzing bass lines, raw guitar and some extra electronics on top. The vocals of Clara have this typical and delicious French accent, but also a timbre of voice, which is sometimes reminding me of Siouxsie Sioux.

+ + + : If you like cold-wave and post-punk music, Tisiphone will for sure catch your attention by their raw and rather unpolished sound. I especially like the cold and deep, vibrating bass playing, which is quite noticeable on both debut cuts. “Blind” might you remind you of Siouxsie And The Banshees, but sounds more bombastic.

– – – : The album takes off with two promising songs, but unfortunately I heard a few less convincing cuts next. The final part is a bit more convincing so in the end I would say Tisiphone is moving in between a few real successful tracks and a few average-like pieces.

Conclusion: Let’s keep in mind this is the official debut work from Tisiphone. It could have been more convincing, but globally speaking they have a few cool songs, which makes me say it’ll be a good idea to keep an eye on this band.