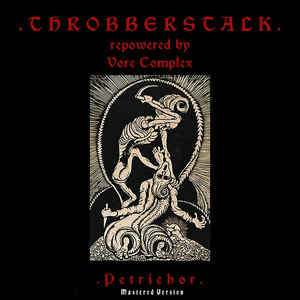 Background/Info: This album was originally released in 2017 and consisted of songs originally composed by Throbberstalk and, which got reworked by Vore Complex. The German solo-project Throbberstalk was mainly active in the 90s while the British Vore Complex is a contemporary project. The original “Petrichor”-album has now been remastered.

Content: If you’re a bit familiar with the original stuff of Throbberstalk you for sure will recognize the dark-electro & ambient format reminding me of bands like Mortal Constraint, Mentalo & The Fixer, Skinny Puppy and co. The original approach has been mixed with a more contemporary input injecting a new life into the songs. The music of Throbberstalk has been a bit polished and in a way reinvented by Vore Complex

+ + + : This concept is nothing new although I can’t remember to have heard a band, which is no longer active remixed by a contemporary formation. It’s a meeting between different generations, but the love and passion of music has no limits. I’m sometimes missing the original ‘rough’ format of Throbberstalk, but at the other side I really enjoyed some reworked cuts featuring modernism and refinement. One thing is for sure, both projects are perfectly fitting with each other and it could incite Throbberstalk to start writing new music with Vore Complex as producer. I also want to say a word about the great, informative booklet, which will give you more details about Throbberstalk and the way this album came to life.

– – – : Both bands definitely deserved (for the first one) and deserve (for the other one) more recognition.

Conclusion: Dark-electronic music with attitude! It’s a pity Throbberstalk didn’t get more recognition when the project was active than today.