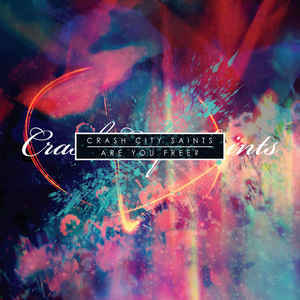 Background/Info: Seven years after their debut album “Glow In The Dark Music” this new opus by Crash City Saints sounds a bit like a resurrection and a new start. “Are You Free?” is a bit of conceptual work dealing about the story of a teenager growing up in a dead-end small town in the early 90s. This work has been accomplished with numerous guest artists.

Content: The sound and influences of Crash City Saints are clearly referring to shoegaze music. You feel the shadow of The Jesus And Mary Chain hanging over this work, which mainly comes through in the typical fuzzy guitar play. But “Are You Free?” also experiments with other elements, which now remind me to The Sex Pistols for some guitar riffs and then to psychedelic rock. There also is a song evoking Cocteau Twins memories, which is not a coincidence as Simon Raymonde (Cocteau Twins) played bass guitar on this track.

+ + + : Crash City Saints are back on track again, having achieved a great piece of music. The influences aren’t that new at all, but the way all influences carried by a solid shoegaze basis have been merged together is absolutely great. This album features multiple attention grabbers and even a few outstanding songs such as “Spirit Photography” and “Annabella”. There’s a real harmony between all influences although the guitar play remains the most noticeable aspect of the production.

– – – : There are a few short intermezzos, which aren’t adding any bonus to the album.

Conclusion: “Are You Free” is a great opus with a kind of hypnotic feeling, which I’m sure will appeal for all lovers of shoegaze music.