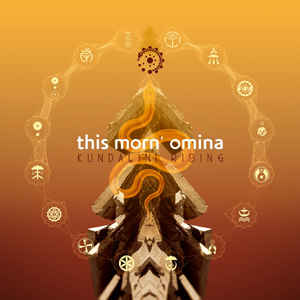 Background/Info: It took 6 years for This Morn’Omina to strike back with a new album. The band originally set up by Mika Goedrijk became one of the main flag holders of Ant-zen so it was a real big surprise to see this ‘industrial’ formation getting signed to Dependent. Since the previous full length (cf. “L’Unification Des Forces Opposantes”) Mika Goedrijk has been joined by Karolus Lerocq while the live line-up changes as well during the past few years. Bavo Jipla, Jelle Mattez and Peter Morningstar became live members and also contributed to the percussions on this new work.

“Kundalini Rising” is a new conceptual work taken from ‘In Tantric lore, the term Kundalini – meaning serpent power in Sanskrit – describes a spiritual power inherent to each human, symbolized by a coiled snake at the base of your spine which can be awakened and incited to rise by the practice of Yoga. When this process is entirely successful, the serpent unites with the cosmic soul, thus granting man the attainment of highest bliss and enlightenment.’

Content: The Belgian formation composes a sound that will mainly appeal to industrial music lovers, but This Morn’Omina always has been much more than simply an industrial average band. The ritual element empowered by massive percussions and bombastic electro kicks plus a real cascade of ethnic samplings creates this unique sensation. It’s tribal and transcendental, but still more electro-driven while Mika Goedrijk is now singing on a few cuts as well.

The impressive percussions are more than ever before the main element of this album and when it comes to recording and production a real tour de force. On a few cuts the sound has a bit lost of its initial power, but gained in authenticity and maturity to play of real percussions.

The second disc is more into mystical atmospheres. The sound is somewhat different although easily recognizable. You here get the feeling this second disc accentuates the practice of Yoga. The songs are more wafting and with some visual appeal. All together both discs are complementary.

+ + + : This Morn’Omina strikes back with some interesting evolutions in sound while holding on their basis. The percussion play is authentic while reinforced by the electronics and heavy, bombastic kicks. If the band remains linked to the big hit “One Eyed Man”, this album reveals maybe a bigger hit entitled “Garuda Vimana”. It’s definitely more worked out, more trance-like and getting you into a frenetic dance where quite spontaneously you gone shout together with the samplings. This song is an absolute master piece filled with great atmospheres, monstrous horn-like blasts and a transcendental rhythmic.

The songs have been meticulously and progressively built up and even if This Morn’Omina can’t compose original ‘short’ cuts, you never get bored. The ritual and tribal aspect of a few songs reminds me a bit of late Muslimgauze and this is an interesting and mysterious ambient flavor recovering this work.

I also like the diversity between both discs resulting in 16 fascinating cuts.

– – – : The opening song left me rather skeptical. It definitely sounds This Morn’Omina-like, but it’s more electro-like and I was not that convinced by Mika’s vocals being clean and somewhat flat. I’m also missing some power in a few cuts, but at the other side you there can hear a more explicit and elaborated ambient element.

Conclusion: This Morn’Omina remains the absolute leading formation in a very complex, but fascinating style, which is pure crossover between different genres. This is a great and original production and definitely a reference when it comes to industrial music where all bands are mainly hiding behind laptops.