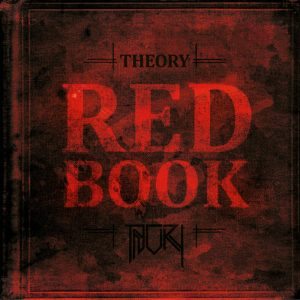 Background/Info: Theory is one of the newest additions to the Mindtrick Records roster. Driven by the creative spirit of Antuan Graftio (nearly a veteran of the scene and who’s active in other formations like Conjuncture, Scaris Tandem..) he released a few previous productions under the Theory moniker. “Red Book” brings us 7 songs filled with industrial music and ambient spheres.

Content: Both debut cuts bring us back in the good-old days of truly industrial music. The percussion sections are into the authentic spirit of industrial music, but there also is an overwhelming and obscure ambient layer supporting the songs.

This ambient inspiration is more at the forefront of the rest of this album. The composition becomes more visual now, inviting the listener to visit imaginary wet cellars animated by a slow rhythm. It’s somewhat experimental-like as well, but always holding on to a certain spirit from 80s experiments.

+ + + : Theory is not the classical contemporary industrial formation, but fills a gap between the authenticity of the 80s industrial music and the approach of today. “Fatal Error” is an absolute masterpiece in the genre, which holds you in its grip for 15 minutes and even moves into an industrial trance passage. The ambient side of the work is also a real lust for the ears. The main strength of Theory is the atypical approach in the writing of industrial music and mix with dark-ambient.

– – – : Both debut cuts are definitely industrial-like and a bit like creating a contrast with the rest of the tracklist, which become more ambient minded. Well, you don’t hear me to complain, but if this work should have been entirely driven by the same industrial sound it would have been for sure a totally accomplished work.

Conclusion: Theory reminds me of the golden- and most creative years of industrial music and that’s definitely an approach I’m missing today. This formation also expands the musical horizon of Mindtrick Records.