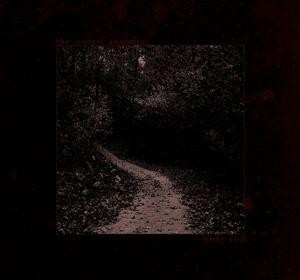 Content: Andrew Grant likes to collaborate with other artists, but for his latest opus he strikes back alone to release one of his most surprising albums ever.

“Only Red” sounds to me more like a conceptual release moving towards ritual-ambient elements. We immediately enter into the strange universe created by The Vomit Arsonist, which embraces disturbing sound creations and reveals genius writing and sound production. The next cuts will simply reinforce the conceptual- and ritual impression of the work.

It feels like an industrial mantra composition composed by heavy resonating and somewhat didgeridoo sounding sound effects. It creates a low vibrating sound wave that will give you goose pimples. I got the impression that real voices (a kind of mantra) have been transformed to reinforce the vibrating element. When you play it loud you really will feel the walls trembling around you.

The tracks have a kind of monotonous aspect, but which is totally appropriated for this kind of creation. You progressively feel like you are entering into a transcendental dimension leading you into a strange rite. The sound waves get heavier and are sometimes joined by screams lost in a kind of endless space. The tracks are pretty long, which gives enough time to have a real freaky impact on the listeners.

Some passages only get darker and darker, and progressively join the ultimate point of horror called “GW (Rdx)”, which features Kristoffer Oustad. We recently discovered the debut album (cf. Filth Haven”) by K. Oustad, which was a successful piece of dark-ambient. “GW” (“Go Without”) is a remix of the title song that was released in 2012. This remix totally matches with the global atmosphere running through “Only Red” and is a perfect cut to end in a freaky way.

Conclusion: What I like on “Only Red” is the easily recognizable sound treatment, which is absolutely terrific, but still rather unique in its genre. This is a genius mix between dark-ambient and ritual elements.