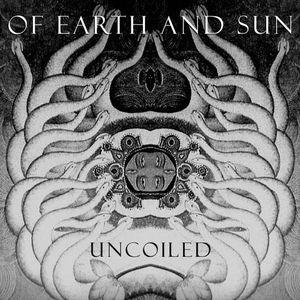 Content: Of Earth And Sun is a new signing to the Malignant Records roster and the first official album for this Denver based solo-project as well. Set up by Matthew Hunzeker the artist defines his work as ‘cataclysmic ritual doom’.

The work is quite impressive for its global sound production, which has been composed with a mix of electronics and organic instruments (like bone trumpets). It reminds me of some bands from the early 80s, which were dealing with experimental and ritual music. There definitely is a strong ritual aspect running throughout the work. The electronic manipulations feature low and freaky noise vibes, but Of Earth And Sun uses a real arsenal of electronic sound treatments. There are vocals on top of the work, but which are more like an extra instrument featuring tormenting growling passages.

The vocals are bestial and are like coming from somewhere else… maybe an unknown obscure sonic planet.

Both debut cuts are cool, but “Veil Of Illumination” is a real masterpiece, which reminds me a bit of In Slaughter Natives, but definitely in a much darker and tormented approach with some extra heavy sound waves. “Offering Of The Seven Limbs” definitely indicates an imaginary dark rite while the music takes us away on a total horror trip. Low, buzzing sound waves and other distorted sounds resonate while harsh vocals can be heard in the background. This is a brilliant piece of electronic tormented arrangements.

And “Uncoiled” still has a few more surprises like “Consolatrix Afflictorum”, which is one more chilling passage. It sounds a bit more like a soundtrack-conceived cut revealing an impressive number of sounds and noises (like field recordings), but I was especially impressed by the global progression of the track. It crescendos towards a fictive vision of hell transposed into a great composition.

Conclusion: “Uncoiled” reveals an ambient sound, which can’t leave dark-ambient lovers unmoved. I totally agree with the ‘cataclysmic’ description of Hunzeker who reveals himself as a new upcoming master in the ritual and dark-ambient genre. This is a great freaky production!

Tags: Of Earth And Sun