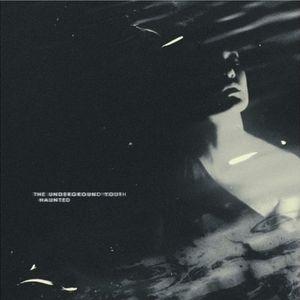 Content: The Underground Youth is a British band, which has been already into music for a couple of years, releasing several albums. The band seems to like releasing vinyls and I have to admit this good-old ‘retro’ style is totally appropriated for their music.

“Haunted” evokes some good-old souvenirs and I here especially refer to the kind of shoegaze input. But there’s much more to find and explore. The sound rather appears to be a fusion between different influences, which move from shoegaze to dream-pop and even a touch of neo-folk music. The main strength is the dark and sometimes disturbing mood emerging from the work. There’s a kind of visual appeal, which reminds me of the particular atmosphere themes felt in the successful movie of Sofia Coppola’s “The Virgin Suicides”.

“Haunted” is an invitation to join a dreamy world of sadness, which is characterized by an impressive, moody guitar playing. A few cuts are a little bit harder, which is mainly due to the kind of resonating drones. Just pay attention to “Slave” and you’ll quickly get into the essence of this opus. I also recommend “The Girl Behind” for the once more outstanding guitar parts, but also for the mix of male and female vocals. The album finally comes to an end with the beautiful “Returning To Shadow”. My only regret is that this album only features 9 songs, but they’re definitely worthy of examination.

Conclusion: “Haunted” is a dark and moody album leading the listener into a kind of delicious malaise. It clearly is not the kind of music you should listen to during depressive moments.

Best songs: “The Girl Behind”, “Dreaming With Maya Deren”, “Slave”, “Returning To Shadow”.

Since you’re here … … we have a small favour to ask. More people are reading Side-Line Magazine than ever but advertising revenues across the media are falling fast. And unlike many news organisations, we haven’t put up a paywall – we want to keep our journalism as open as we can. So you can see why we need to ask for your help. Side-Line’s independent journalism takes a lot of time, money and hard work to produce. But we do it because we want to push the artists we like and who are equally fighting to survive. If everyone who reads our reporting, who likes it, helps fund it, our future would be much more secure. For as little as 5 US$, you can support Side-Line Magazine – and it only takes a minute. Thank you. The donations are safely powered by Paypal.
Tags: The Underground Youth