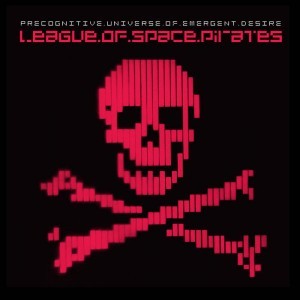 Content: League Of Space Pirates is a name I never heard of before, but this debut album for sure is an opportunity to get a bit more familiar with this weird-named formation.

The pop format of this band rapidly reveals a rather unpolished production. It’s not exactly what I should call a high level recording although this ‘evil’ sound might be interesting to avoid comparisons with leading pop formations. Globally speaking this work is rather easy listening music, but unfortunately is missing consistency.

There’s some diversity in the cadence and the kind of astral-minded electronics are quite interesting, but there’s no real strong and carrying melodic aspect, which is a rather essential ingredient when it comes to make pop-inspired music. The question is if League Of Space Pirates is really dealing with pop music!?

Some of the songs rather reveal an experimental approach (cf. “Dead Letter Office”), but without an apotheosis. I rather experienced this work as a band exorcizing different ideas where they no will have to find a more consistent and exciting basis to move on with. “She’s A Star” is the single exception of a song showing a bit more inspiration and accomplishment. It also is one of their darkest and ‘harder’ songs on, which you can also notice cool vocal parts. That’s unfortunately not enough to speak about a successful debut.

Conclusion: This band unfortunately needs a bit more experience and maturity to become credible. A debut album is not an easy thing so let’s see what the future will bring!

Since you’re here … … we have a small favour to ask. More people are reading Side-Line Magazine than ever but advertising revenues across the media are falling fast. And unlike many news organisations, we haven’t put up a paywall – we want to keep our journalism as open as we can. So you can see why we need to ask for your help. Side-Line’s independent journalism takes a lot of time, money and hard work to produce. But we do it because we want to push the artists we like and who are equally fighting to survive. If everyone who reads our reporting, who likes it, helps fund it, our future would be much more secure. For as little as 5 US$, you can support Side-Line Magazine – and it only takes a minute. Thank you. The donations are safely powered by Paypal.
Tags: League Of Space Pirates