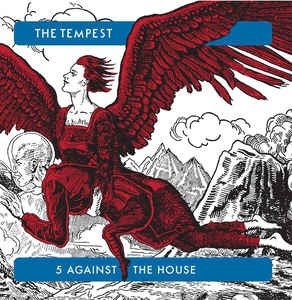 Background/Info: This album is a re-issue of the original vinyl released in 1984 on Anagram Records. The Tempest was a 5-headed formation, which released one single album and 2 maxis. This re-release is available on vinyl format and CD featuring 3 extra songs. The extra tracks are taken from both maxis. The most familiar member of the band is Alex Novak who you also know from Venus Fly Trap. Other involved members were Mark Refoy (Syndromes, This Parade, Tell Tale Hearts, Spacemen 3, Spiritualized, Slipstream, Pet Shop Boys), John Luccibello (Russians, Syndromes, Venus Fly Trap), Mick Packwood (Wheres Lisse, Jazz Butcher) and Alan Emptage.

Content: The Tempest will clearly remind you of the new-wave spirit of the 80s. The typical deep bass and mewing guitar parts plus dry snares have been a kind of new-wave trademark. The work has been achieved by some electronic passages and a few saxophone parts, which also was quite familiar during the 80s.

“5 Against The House” is not exactly what I would call a stereotypical new-wave album,  as the band also experimented with a few other influences. A few songs reveal a kind of dark-funky touch, which might remind you of some legendary Belgian 80s formations like Lavvi Ebbel and Alles Allez.

+ + + : This album is an interesting item to enlarge your 80s new-wave collection. This band definitely belongs to the endless list of bands, which never became the most successful in their genre although revealing great songs. I like this good-old 80s spirit, which is runs throughout the entire album.

Conclusion: The Tempest can be seen as a new 80s ghost that has been reactivated to haunt the darkest dance floors. It’s an interesting formation, which clearly deserves a re-release of their single album in history.