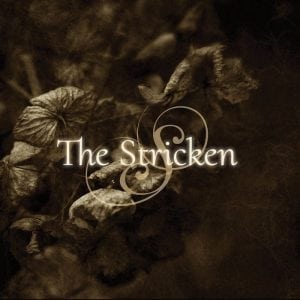 Background/Info: The Stricken is a brand-new project driven by Claus Larsen (Leather Strip, Klute, Am Tierpark ao) and producer Ian Donaldson (known from his involvement with Bronski Beat).

Content: This self-titled debut album is not an easy thing to define. Ian Donaldson definitely injects a pop touch to the work while I can imagine Claus Larsen took care to get the sound darker. The result is a surprising symbiosis between elements of pop- and industrial music. It’s pretty minimal-like and still bombastic. It’s not exactly the kind of ultra-danceable music although there are a few more danceable passages featured. Claus’s vocals are regularly switching from enraged parts into spooky vocals and from sweet parts into sensual passages.

+ + + : This project is a kind of challenge featuring artists I didn’t expect working together. The result has something innovative and appears to be a new challenge for Claus Larsen. I especially like Claus Larsen when he’s singing in a more spooky way; the song “A Doom With A View” is a cool cut illustrating this approach.

– – – : Despite of this challenging project I can’t affirm to have been totally convinced by The Stricken. I like this industrial-pop style, which is progressively gaining more artists in the genre, but “The Stricken” sounds a bit like a work exorcising multiple elements while I’m sometimes missing a bit coherence between the tracks.

Conclusion: For a prolific artist such as Claus Larsen it’s simply great to see him exploring new horizons and working with a great artist such as Ian Donaldson, but at the other hand it also is one of the very few projects featuring Claus Larsen that I haven’t been totally convinced.