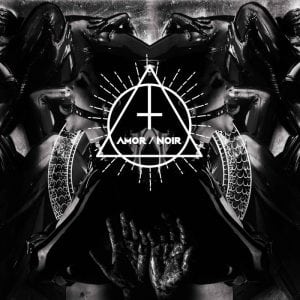 Background/Info: Two years After their self-titled debut album, Maria Joaquin and Kyle Craig are back on track unleashing a new opus.

Content: This Canadian duo deals with a very personal exposure of electronic music, which is hard to define. I experienced “Amor/Noir” as the symbiosis between different influences. You’ll recognize some d’n’b influences, which were already running through their debut work, but this new work becomes rougher and more industrial-like. I sometimes get the impression to hear Miss Kitty raped by an industrial producer. The songs also have something space-like and sometimes pretty hot because of panting passages.

+ + + : I prefer this new album instead of the first one. There still is something unpredictable and apart from classical music standards while the industrial-pop style has something ‘hot’ and dynamic. The songs have been masterly crafted. The electronic layers have been now and then empowered by guitar riffs while the vocals are absolutely great and charismatic. This is definitely a band with a very own sound!

– – – : I don’t have real minus points. The songs are somewhat similar to each other, but I’m afraid that’s true for most of the releases.

Conclusion: Strvngers deals with an electro-pop format, which is a mile away from the traditional standards. This is industrial-pop, which might become the path to follow for the next few years.