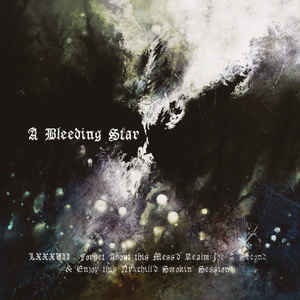 Background/Info: Alex Goth is the creative spirit hiding behind A Bleeding Star. Clearly devoted to the darker realms of ambient music this band has already released a considerable number of productions. This new opus wants to invite listeners to embark on a ‘manifesting journey through astral locations by witchcraft and teleportation.’ Seven tracks have been accomplished.

Content: There’s no real foreplay, but a direct boarding to travel throughout dark-ambient soundscapes made of boiling noises and other deep, blasting sound waves. The work seems like having been achieved by field recordings or just obscure samplings.

The tracks have been meticulously built up finally reaching their apotheosis revealing some mysterious sound atmospheres. The work has a visual strength, which can mainly be linked to an impression of despair and nihilism.

+ + + : This is an entertaining and chilling dark soundscape with a visual strength. There’s a noticeable and great progression running through a few cuts and I especially recommend “Unlatchin’ All That’s Small​-​Lock’d​-​Black​-​Box’d In the Back Of My Mind A Daze At A Time”.

– – – : You’ll not be disappointed to discover this new opus by A Bleeding Star although I can’t say to have heard innovative elements or exceptional compositions. It’s an entertaining production but without a real climax.

Conclusion: I expected to visit some imaginary astral places, but got the feeling of being imprisoned in cold and lost cellar. This work reveals real good ideas, but it sometimes sounds a little less unaccomplished and especially when you compare the sound with established formations in the genre.

Best songs: “Unlatchin’ All That’s Small​-​Lock’d​-​Black​-​Box’d In the Back Of My Mind A Daze At A Time”, “LXXXVII: Forget About This Mess’d Realm For A Second & Enjoy This Nyxchill’d Smokin’ Session”.