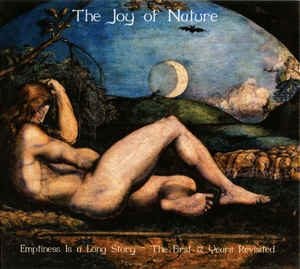 Background/Info: The Joy Of Nature is not exactly the most renowned formation dealing with ethereal, folk and experimental music. The Portuguese formation originally set up in 1998 and called The Joy Of Nature And Discipline released an impressive number of releases. They now self-released a work featuring a selection of songs written during the first twelve years of their existence.

Content: If you’re a little less familiar with The Joy Of Nature you rapidly will recognize their passion for authentic, acoustic instruments. But they also used a mythic instrument as the Theremin, which remains an absolute reference in the history of early electronics. The songs have been sung in Portuguese- and English. The female vocals are pretty fragile, which is quite complementary with the delicate song writing.

+ + + : I’ve always liked the authentic character of this band’s sound. Acoustic guitar, flutes, harp, accordion are some of the instruments you might recognize. I already mentioned the delicacy of the songs, but there also is a deeply artistic approach resulting in beautiful songs. Last, but not least I also like the female vocals.

– – – : This album is missing a climax. I don’t know if it’s because it consists of early songs, but you can feel there’s more potential in the composition than what’s coming out of it.

Conclusion: This album feels like a sweet reassurance, a kind of sweet and melancholic ballad to become your best friend during lonely evenings.

Tags: The Joy Of Nature