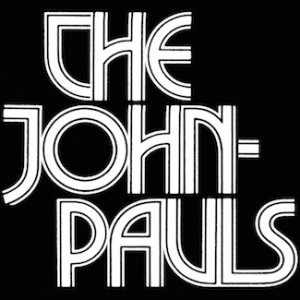 Background/Info: This is the self-titled debut EP by a Texan (USA) trio based in Austin. They were all involved in other bands before setting up The John-Pauls.

Content: The trio claims to ‘bring veteran music sense to their teenage-grownup approach’. I think it’s a right definition of a band founding their main sources of inspiration in the decade of the new-wave and post-punk music.

Four songs is not that much to get an idea about a band’s potential, but it’s enough to see a link with the guitar playing of The Cure with some heavier post-punk flavor on top. The last song sounds a bit different revealing a kind of ballad style, which unfortunately is not their best exposure.

↑↑↑: It’s not that original, but is an adept of post-punk & new-wave influences. I especially like the guitar playing of this band.

↓↓↓: Despite of pretty cool influences, none of the songs are totally convincing while the global sound production and mastering could have been more professional as well –although it could have been intentional to reinforce the 80s feeling.

Conclusion: The John-Pauls reveal interesting ideas and great influences, but this debut EP is not exactly the most inspiring production I’ve heard in the genre.

Best songs: “We Should Be Armed”.