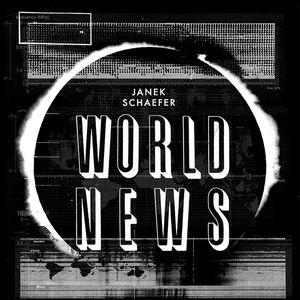 Background/Info: Janek Schaefer is an artist who has already released productions since the 90s. While most of his work got released on his own AudiOh! label, he from time to time also works with other labels.

Content: Janek Schaefer is what I would call a sound architect. His work is characterized by a total experimental formula consisting of collecting sounds and noises from very different origins and to rework them into a kind of recycled noise. “World News” is the perfect illustration of this procedure, taking off with a kind of sampled radio waves capharnaum where you’ll recognize a short passage of a Simple Minds song. And that’s precisely the ‘concept’ of the work, which is based on source material that has been taken from several International newspapers over a period of a week.

The work sometimes reminds me of a pioneer like The Hafler Trio. It’s totally experimental and a bit abstract while darker sound waves leads the listener into a place of mystery. A few spoken words inject a spooky element to the work, which finally ends in a somewhat cinematographic genre.

↑↑↑: This work reveals great sonic manipulations, but I especially like the way it has been merged together with darker ambient passages.

↓↓↓: It’s not always easy to grasp the essence of such an artist who’s more into sound research and sonic manipulations instead of really composing music.

Conclusion: If you’re into atypical electronic music based on experimentalism and avant-gardism, the “World News” of Janek Schaefer will fully satisfy your curiosity.