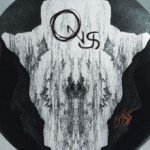 Background/Info: Onus is a new project set up by Peter Bjärgö (Arcana, Sophia, Karjalan Sissit ao) and Sal-Ocin (Empusae, Tzolk’in). “Proslambanomenos” is their debut work, which ‘transpires with the burden of life yet offers a far away glimpse of hope’.

Content: The album reveals 6 tracks with a rather open-minded arsenal of influences. There’s a solid dark-ambient bases reinforced by heavy percussion parts and some ethereal passages as well. Onus sounds like the perfect offspring between both artists and their respective sources of inspiration. They seem to be complementary and that’s why this work doesn’t sound like an occasional project.

There’s an overwhelming dark atmosphere throughout the compositions, which have been joined by some psychedelic guitar passages and a noticeable rhythm. The cadence moves from a slow and simple accompanying tempo towards harder and bewitching passages. “My Black Wave” is a great cut in the genre. A few vocal growls can be heard now and then as well.

There also is a cool ethereal wink called “Into Higher Self” reminding me of Dead Can Dance. That’s not really of a coincidence as I think to remember that Bjärgö is a huge fan of this band. The two last cuts move into a more cinematographic format.

↑↑↑: I like the diversity of the work, which clearly brings different influences together. There also is a remarkable osmosis between the work of Arcana and the percussion/tribal influences of Empusae.

↓↓↓ : The diversity of the album maybe is also the main point that might hurt as it’s not exactly creating a real compact entity. The album sounds a bit like the exorcism of many and very different ideas.

Conclusion: “Proslambanomenos” brings the creative mind of two artists together. The work is diversified and globally speaking a fascinating opus.

Best songs: “Into The Higher Self”, “My Black Wave”, “The Dreams Die Young”.