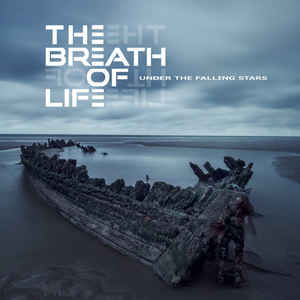 Background/Info: Set up in 1985, The Breath Of Life became one of the most important gothic formations in Belgian’s history. And yet I sometimes get the impression they got more recognition abroad than in their own country. The band now consists of Isabelle Dekeyser (vocals), Didier Czepczyk (bass guitar), Giovanni Bortolin (Keys and violin) and Philippe Mauroy (guitar & drums programming). The main point about the line-up is that Philippe Mauroy rejoined the band after an absence of several years. “Under The Falling Stars” also is the band’s first album in five years and the first one released together with Belgian label Wool-E Discs.

Content: I’m not saying that The Breath Of Life reinvented its own sound, but every single new work sounds a bit different, like a band holding on their basics, but each time again trying to add a few new elements and details. “Under The Falling Stars” became a passionate work carried by impressive guitar playing, low buzzing and resonating bass play, the somewhat folk and magic-like violin passages and of course the charismatic vocals of Isabelle.

The sound once more will get you back in 80s reminiscences. Cocteau Twins for sure remains a band you’ll possibly have in mind, but This Breath Of Life also have this little touch of magic mixing different elements into its very own sound DNA.

+ + + : The main strength of this work is the experience and genius of the musicians. They all exceed in their own discipline resulting in a sweet harmony between all instruments. The songs are carried by the guitar and get darker by the low bass guitar whiles the vocals and especially the violin create some enchantment. I just forget the keyboards accentuating the melodic aspect of several songs.

“Under The Falling Stars” is an accomplished piece of work. There’s a great progression running throughout the songwriting while you can feel a true passion emerging at the surface. Sometimes a bit bombastic, but always delicate this album is an absolute masterpiece.

– – – : When you’re listening to a masterpiece it’s simply impossible to find major points to improve. Both debut songs are maybe a little less hesitant –or simply teasers, compared to the rest of the tracklist.

Conclusion: It’s simply fantastic when a band after years of involvement has the passion and creativity to release one of their best productions to date. And according to my humble opinion, “Under The Falling Stars” maybe is their best work in history and for sure one of the best gothic album of the year!

Tags: The Breath Of Life, twins