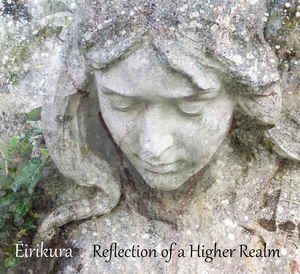 Background/Info: Wrotycz Records has signed this new formation, which rather appears to be a ‘collective’ instead of a ‘band’. Eirikura are hailing from Prussia. This debut work s features 13 songs and has been accomplished by an impressive number of musicians.

Content: This work is an impressive production, which mainly sounds ethereal- and cinematographic like. The main characteristic is the use of multiple authentic instruments played by guest artists. You’ll get the opportunity to hear the magic sounds of a violin, oboe, viola, flute, piano, trumpet, drums… but still different guest singers. It all together creates a very authentic and sometimes folk-like impression.

The music has been mixed with beautiful (mainly female) voices, which will make you dream away. The songs have been mainly sung in English language, but you’ll also discover a few Gaelic- and Prussian sung tracks. The lyrics are clearly inspired and driven by poetry.

+ + + : “Reflection Of A Higher Realm” is what I would call a beautiful album. It also is a real achievement to have assembled that much guest musicians playing different instruments. Most of the instruments inject a truly spirit, which can be now into melancholia and next into pure reverie. I enjoyed the trumpet play on “Today’s Eulogy”, but I definitely can mention numerous other tracks. The song of the album maybe is “Dance Into Images”, which next to outstanding female vocals is featuring a kind of children choir. It creates an extra and somewhat transcendental feeling.

– – – : I don’t see real points of discussion about this album. It’s such an artistic and achieved piece of music you only can, but adore this work.

Conclusion: This work is a sort of music blessing. It’s a precious and fully artistic creation getting us back to the sources of ‘music’ in the truest sense of the word.