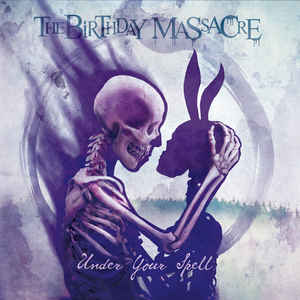 Background/Info: Canadian formation The Birthday Massacre became an instant revelation after their very first full length. Fifteen years have passed since the “Nothing & Nowhere”-album and they now strike back with their 7th studio album.

Content: The Birthday Massacre moved on mixing melancholic electronics together with goth-rock guitar parts and the fragile although powerful vocals of their lead singer/diva Chibi. “Under Your Spell” sounds a little bit more electronic than previous work, but it first of all remains a powerful mix of rock and gothic elements, which are sweetened by melodic electronics.

+ + + : I can’t say that this new opus is innovating, but The Birthday Massacre remains a rather unique formation in their style. There’s no reason to change, but it all sounds like they readjusted a few elements and especially the electronic treatments. “Without You” makes me think to Depeche Mode although carried by a harder basis. The magic of the band remains the kind of duality between the furious and great guitar on one side and the fragility of Chibi’s timbre of voice on the other. There’s this constant duality between power and melody, which is maybe more balanced on the new work. There’re multiple cool songs running through this work and even a few new ‘potential’ hits such as “Under Your Spell” and “Hex”.

– – – : I already mentioned The Birthday Massacre is not innovating, but do they really have to change a great and successful sound formula!? I think there’s no way in between; you either like them or not!

Conclusion: I’ve never been disappointed by The Birthday Massacre and “Under Your Spell” simply confirms their status of leading underground goth-rock-pop formation.