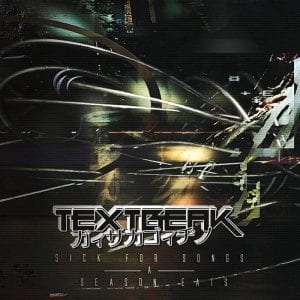 Background/Info: Behind Textbeak is hiding Michael Szewczyck, which is a kind of US veteran in electronic/industrial music. He’s active since the 80s and never stopped composing music, DJ-ing, touring. Under the Textbeak moniker he unleashes this new opus featuring 11 songs and on, which he got the contribution of numerous artists such as Mark Stewart, Searmanas, Bestial Mouths, Peter Hope, Janine Rainforth, Cyanotic, Vaselyne ao while John Fryer has been asked to produce the album.

Content: All the songs have been sung by guest artist while others sometimes contributed to the writing. It quite naturally resulted in an open-minded work, which is covering varied influences. You now discover an EBM-driven song while others are more into industrial and bombast. But there are also some vintage electro passages, which might remind you of Suicide and slower driven pieces evoking the cold sensuality of Portishead.

+ + + : Diversity is the main characteristic of the album, which more sounds as a compilation instead of a real artist-album. The different singers each inject their very own timbre of voice, which is mixed with different kinds of music. My favorite track is maybe the most atypical one because of it’s Portishead touch (cf. “Vacuum Decay” feat. Searmanas. The more industrial-ritual driven “Blood Storm” feat. Bestial Mouths is another attention grabber. The common element between both songs is the female singer, which maybe reveals that Textbeak sounds at its best with female singers.

– – – : All the songs aren’t always that easily accessible, but that’s maybe also because of the ‘compilation’-feeling. But my main regret is that there are less attention grabbers featured.