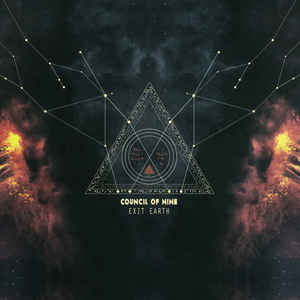 Background/Info: American solo-project Council Of Nine aka Maximillian Olivier is back on track, unleashing a             new conceptual work. The fourth solo-album is inspired by a horrible drama that happened on March, 22nd, 1997 in Rancho Santa Fe (California) where 39 members of the ‘Heaven’s Gate’-cult committed suicide.

Content: “Exit Earth” sounds like an invitation to dive into a dark sonic abyss where the listener will be submitted to overwhelming- and vibrating sound waves. You now and then will get the impression to feel a presence, which is only accentuated by ghost-like voices in the distance. Quite progressively the ‘travel’ becomes a bit more dreamy-like although flavored by a solid dark sound atmosphere.

+ + + : Council Of Nine has proven over the past few years to be a real reference when it comes to dark-ambient/cinematographic music. The new work doesn’t sound that different and is mainly characterized by an impressive sound mix and –production. I get the feeling of hearing resonating sound waves in a cathedral, which is something freaky and will give you goose pimples. Especially the opening tracks create this sensational effect, which for this kind of music can be considered as a qualitative criterion. The music already reveals this unique visual appeal, which will get you throughout imaginary cellars and other abyssal depths.

– – – : I first listened to the album and next discovered its concept. It remains a cool opus, but I have to admit I would have expected something darker and especially more disturbing when considering the concept that has inspired the music.

Conclusion: Despite of the horrible drama behind this conceptual release, it rather feels as a dark sonic caress.

Best songs: “Time Is Running Out”, “This World Has Not Been Kind”, “Red Alert”, “Death Shrouds”.