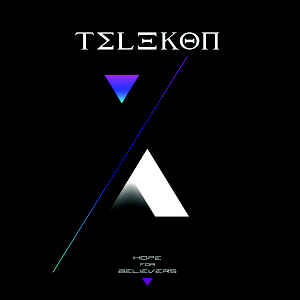 Background/Info: Telekon reminds me of an album of Gary Numan, which might be a potential source of inspiration. This duo is driven by Juan Grande (Techni-ka) and Raúl Muñoz-Torrero (Insight). The released their debut full length now a few months ago on Russian label Scentair Records.

Content: Scentair Records is a prolific ground for electro-pop formations and that’s clearly the main influence running throughout the album. “Hope For Believers” has a cool vintage sound approach, but which is also inspired by Depeche Mode. These cuts are more ‘classical’ pop songs. Some of the cuts are pretty dance-like.

The album features 10 songs plus 5 remixes by Nordika, Uncreated, WANT/ed, Cyborgdrive and a remix by Telekon themselves.

+ + + : This is an accomplished debut work mixing 80s influences together with contemporary elements. I especially prefer the songs, which are less inspired by Depeche Mode. I especially refer to the debut part of the work, which is more into a creative process of great sound treatments, effects, cool choruses and electronic space sequences. The vocals (sung in English) are pretty cool.

– – – : The ‘traditional’ pop songs aren’t bad at all, but suffering from originality. I also expected a bit more out of the remixes, which don’t bring a real bonus to the work.

Best songs: “Time”, “King Of Nothing”, “Promise Of Radio”, “Be grateful For What You Have”.