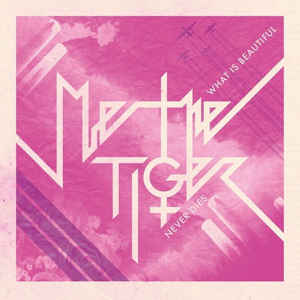 Background/Info: This is the third full length for the electro- & indie-pop Swedish formation Me The Tiger. They literally took me by surprise on previous albums, but especially the previous one “Vitriolic” left me breathless. This new opus sounds like an album with a strong reflection about our world, their leaders and politics generally speaking.

Content: “What Is Beautiful Never Dies” is a strong title for an artistic composition, which moves on there where previous productions stopped. The electronic structures have been empowered by guitar playing resulting in a powerful and yet still very melodic opus. The sweet and somewhat fragile, but sensual vocals of Gabriella totally match the music.

The opening cuts are pretty dynamic and powerful, but there are also softer and more emotional cuts.

+ + + : This band is progressively gaining in maturity becoming one of the hottest ‘young’ bands from the past few years. They make me think of The Birthday Massacre, but with an indie touch and pop approach. But there’s a similar harmony emerging at the surface of the songs. I also like most of the choruses, creating a kind of climax. There are numerous songs I can mention, but I’ll just name “Kerosene” and “Hollow” that feature a devastating bass line. The vocals remain another essential topic of this band; it’s delicate and yet passionate.

– – – : This is a great piece of music, but unfortunately I’m not at all convinced with the rather poorly inspired artwork. It appears to be a point the band maybe has to reconsider to catch more attention.

Conclusion: “What Is Beautiful Never Dies” appears to be a prophetic title for an album, which will for sure become one of my personal favorites of the year!

Since you’re here … … we have a small favour to ask. More people are reading Side-Line Magazine than ever but advertising revenues across the media are falling fast. And unlike many news organisations, we haven’t put up a paywall – we want to keep our journalism as open as we can. So you can see why we need to ask for your help. Side-Line’s independent journalism takes a lot of time, money and hard work to produce. But we do it because we want to push the artists we like and who are equally fighting to survive. If everyone who reads our reporting, who likes it, helps fund it, our future would be much more secure. For as little as 5 US$, you can support Side-Line Magazine – and it only takes a minute. Thank you. The donations are safely powered by Paypal.
Tags: Me The Tiger