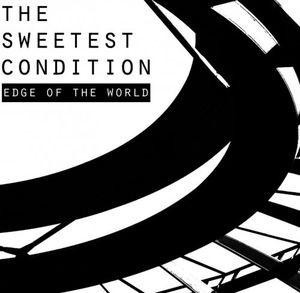 Background/Info: Based in Nashville (USA) The Sweetest Condition is a male-female duo that was set up in 2012 and already released an EP “Truth & Light” in 2013. They now unleash their self-released debut full-length entitled “Edge Of The World”.

Content: The sound is definitely inspired by pop music, resulting from a good balance between electronics and guitar. Some of the songs move into pure indie-pop music and reminds me now and then of Goldfrapp. “Watch You Fall” is a great song in the genre.
The work is based on cool electronic arrangements and some elevating choruses. I here mainly refer to “Secret”.

You also will notice a vague melancholic flavor hanging over a few cuts. A last strength of the band –which also is an essential one, consists of the charismatic vocals of Leslie Irene Benson.

↑↑↑: I especially like the ‘hardest’ and more into indie-pop minded cuts of the album. Most of the songs are well-crafted. The female vocals are charismatic.

↓↓↓ : A few songs can’t really captivate me for having lost the right harmony between guitar and electronics.

Conclusion: “Edge Of The World” is an interesting album featuring a few noticeable songs. I hope to hear more stuff from this band.