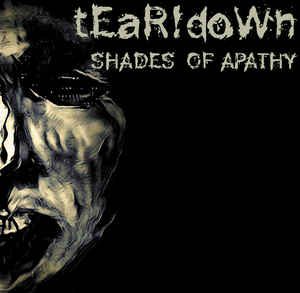 Background/Info: tEaR!doWn is Charly (also involved with Sleepwalk) and singer Oliver Spring (Nine Seconds and former singer of.. Sleepwalk). This album is the successor to “Clouds Over The Sun”, released in 2013.

Content: The sound mixes different elements, which are covering EBM bass lines, dark electronic atmospheres, industrial bombast arrangements, but still melodic passages. One of the main characteristics, which is clearly evoking Sleepwalk are the vocals of Oli Spring. His very typical timbre of voice will always be linked to Sleepwalk.

The album features 12 songs and 3 remixes by The Psychic Force, Pyrroline and kFactor.

+ + + : I think it’s the kind of album that will appeal to early Sleepwalk lovers while the sonic canvas might appeal for EBM freaks and dark-elector heads. Sound-wise I especially like the bombast running through this album and the synth lines, which are probably the most noticeable aspect from the writing process. I also enjoyed the choir’s passage at “Shades”. The remix of Pyrroline is my personal favorite one.

– – – : “Shades Of Apathy” is an easy listening album featuring a few cool cuts, but I’m missing a real climax while I can’t find any real potential ‘hit’. I don’t want to compare this album to the new Sleepwalk opus, but as both bands are clearly related with each other, I think this album is missing the accomplishment and intelligence of the Sleepwalk album.

Conclusion: This album is more special to me for the members instead of the accomplishment. It’s an easy listening production, but I’m missing a true spirit and an apotheosis.

Since you’re here … … we have a small favour to ask. More people are reading Side-Line Magazine than ever but advertising revenues across the media are falling fast. And unlike many news organisations, we haven’t put up a paywall – we want to keep our journalism as open as we can. So you can see why we need to ask for your help. Side-Line’s independent journalism takes a lot of time, money and hard work to produce. But we do it because we want to push the artists we like and who are equally fighting to survive. If everyone who reads our reporting, who likes it, helps fund it, our future would be much more secure. For as little as 5 US$, you can support Side-Line Magazine – and it only takes a minute. Thank you. The donations are safely powered by Paypal.
Tags: EBM, Pyrroline, Sleepwalk, tEaR!doWn