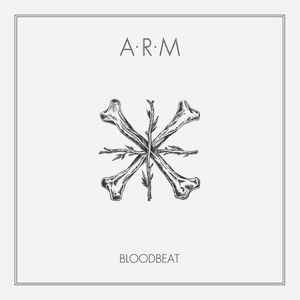 Background/Info: Dan Serbanescu is a Romanian artist you maybe know from his main project Tanz Ohne Musik while he also set up the side-project Alone In The Hollow Garden. ARM is another project he’s dealing with. A debut album entitled “Enheartened” got released in 2014 on tape format while he last year joined hands together with the French M-Tronic label to unleash this new work on vinyl- and digital format.

Content: “Bloodbeat” reveals a kind of dirty, misty and spooky sound. It mixes elements of industrial music together with minimal electronics and even a touch of industrial-pop. The sounds are pretty vintage-like. Ghost-like vocal parts have been added on a few cuts and are perfectly matching with the global approach of this production.

+ + + : ARM clearly appears to be a sonic project with a very personal sound identity. The sound covers different music genres, but characterized by heavy sound treatments, bombastic treatments and other minimal arrangements. There’s a foggy sphere hanging over the tracks, which is one of the main noticeable characteristics of “Bloodbeat”. It also sounds retro-like and that’s one of the main aspects I like.

– – – : “Bloodbeat” however remains an experimental production, which is not easy to define. It might be seen as a visionary work, but is maybe not the most accessible work for music lovers.

Conclusion: ARM reminds me of the early years of electronic music when so-called pioneers were experimenting with their electronic equipment. In a time where most of the electronic productions sound pretty similar to each other it really is a relief discovering artists such as ARM who dare to experiment and innovate.