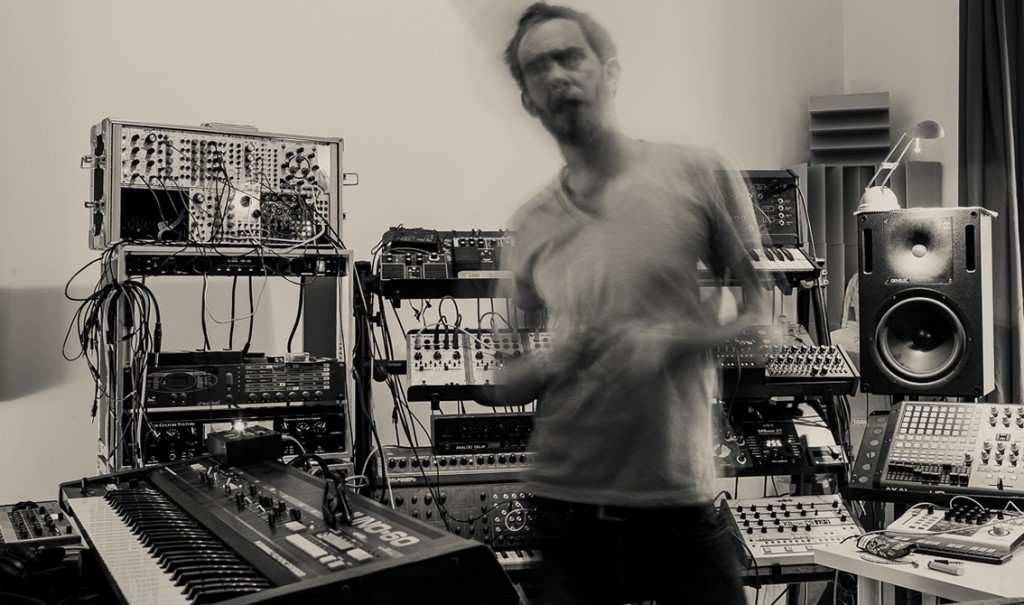 T.Raumschmiere is the electro-punk project of the German techno-producer Marco Haas. He runs his own label Shitkatapult and very recently released his latest album “T.Raumschmiere”.

MH: The first machine I bought was a Roland MC-303 in 1996. It is based on samples of the 303, 808, 909 and Juno series. It had a sequencer so you could do complete tracks with it. I also had a distortion pedal and a flanger pedal. The first keyboard I bought was a Moog Polymoog which I got very very cheap from a music store in my area that closed down and kicked everything out. I do not own both of them anymore because after a while I used all the functions and sounds and wanted to hear something new. Also, if I’d keep every machine my studio would explode right now. So I sell old shit to get new one …

MH: I use a 27-inch i-Mac and Cubase with one RME Fireface 800, and 2 RME Hammerfalls connected to it. Since I use the computer mainly for multitrack recording that’s ok for me. Even on mix jobs it’s still ok. I have some analog outboard connected.

MH: That would be a long list. As mentioned above my studio is packed with shit and it changes all the time. My most valuable pieces at the moment would be the Korg MS-10, the Vermona Per4mer, the Chaos-Engine, the Koma RH301 and the Dave Smith Poly Evolver.

MH: Well I guess that’s a question of taste and how you want it to sound in the end. And it doesn’t have to be vintage to sound good. For example I’m a huge fan of the Memorymoog, the MS-10, the Juno 60. But I also love the Dave Smith Poly Evolver, the Vermona Per4mer or the Dreadbox Erebus.

MH: Hm, at the moment I highly celebrate Esplendor Geométrico. But there are so many good synth bands out there …

MH: Sometimes I wonder why there never was anything bad happening to me or my equipment on stage since I jump around like a maniac and pull water (and other liquids) everywhere. Really, I must be a lucky bastard (knock on wood). I really can’t remember a major fuck up. Or I was just to drunk to care and just went on with the show and what was left. Improvisation is part of the job.

MH: To be honest: I couldn’t care less. If it sounds good I don’t give a sh** where it comes from … analog, digital, a cows fart … who cares … Most important thing is that you have a good song/idea. If you write a bad song/track you can have the best analog and/or digital equipment in the universe and it would still suck.

MH: It is. But you don’t have to follow that, right? I mean come on, we’re not slaves of the equipment/software industry.

MH: I have no fuckin clue.