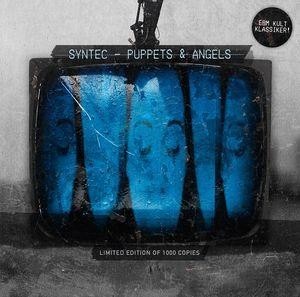 Background/Info:  Uwe Kallenbach (music) and Tobias Hartwig (vocals) were both involved in several electronic bands during the 90s, but their main and most successful band remained Syntec. They got signed to the legendary Machinery Records releasing amazing EP’s and two great albums. The band has been now reactivated and a new album is announced for later on this year.

“Puppets & Angels” is part of the ‘classics series’ and features some of the band’s most famous hits.

Content: Some of the songs sound a bit ‘old-school’, but globally speaking most of the compositions still sound pretty contemporary. Syntec first of all was a band composing magic sound treatments with a perfect balance between melody and power. The vocals were pretty catchy and passionate. Most of their songs have this unique ‘elevating’ characteristic, which mainly came through on their 2nd album “Upper World”. The three title songs of their EP’s (cf. “It Takes A Word”, “Puppets” and “Angel”) still remain their biggest hits. They haven’t lost their original efficiency and can still light dancefloors on fire.

The album has been remastered featuring a few rare versions, but it first of all is an opportunity to rediscover a real talented electro-pop formation.

+ + + : The catchy arrangements, powerful choruses, danceable cadence and passionate vocals remain the main ingredients, which made this band successful.

– – – : A few songs are a little less out dates, but it here concerns only a few exceptions.

Conclusion: I’m really looking forward to discover new work of Syntec, but this album is an excellent opportunity to revisit the genius of this great, early 90s formation.