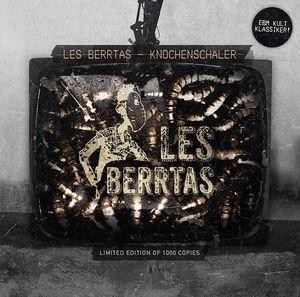 Background/Info: Younger music lovers will probably have never heard of Les Berrtas, but ‘older’ freaks for sure remember this German band set up by G. Why. Kai and Micha Chainsaw. Les Berrtas was an early 90s formation that got signed to the excellent Hypnobeat releasing the album “Nekropolis” (1992) and the EP “Metamorphosis” (1994).

“Knochenschäler” is part of the now famous Infacted-series “Classics Collection” and will bring you some of their most famous cuts back to life.

Content: Les Berrtas was a special band because they had their own sound. It was a typical German electro formation -which is a feeling reinforced by the German lyrics, but something different from the rest. They shared the dark and intriguing electro atmospheric side of Calva Y Nada and a darker and somewhat electro-gothic touch à la Das Ich. I think it’s not a coincidence if they were in touch with Bruno Kramm.

Most of the songs were originally released on their album and cuts like “Knochenschäler” and “Die Letzten Tage”still have the original magic. You have songs which don’t suffer from the weight of time and that is precisely what I experienced listening to this work. A rather funny cut is the cover version of Adamski (Seal) famous hit “Killer”. This work gets also back to their early debut-EP “Die Würmer” and even the cassette “Prolog”.

+ + + : I enjoy the complexity and dark, oppressive moods running through the songs while I’m convinced that the younger electro-lovers will discover an intriguing band.

– – – : The tracklist has been completed by a few instrumental versions and pure album fillers, which aren’t the most exciting part of this work.

Conclusion: Les Berrtas seems to have been reactivated as the band is playing live shows, but this album first of all is a way to rediscover a somewhat forgotten, but talented formation from the past.